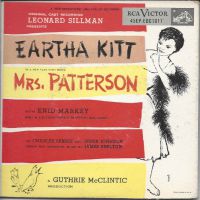 (1 / 5) Is it a musical, or a straight play with incidental songs? Mrs. Patterson was a hybrid oddity of the 1954-55 Broadway season. Having seen Eartha Kitt create a sensation in his revue New Faces of 1952, producer Leonard Sillman resolved to showcase the new star’s versatility in a role far from her kitten-fatale persona. The result — a play by Charles Sebree and Greer Johnson, with songs by James Shelton — was disappointing. The story of a young daydreamer, Mrs. Patterson ran for several months and was quickly forgotten, except for Kitt’s Tony nomination and this cast album. There are long dialogue patches that alternate with Shelton’s six songs, and while Kitt works hard to capture the voice and manner of a teen-aged innocent, the material is weak; the fey lyrics and wispy vocal lines of the songs seldom allow the star to have any fun. Ironically, the only number that’s at all striking (“I Wish I Was a Bumble Bee”) is sung not by Kitt, but by Helen Dowdy in the role of an over-the-hill blues singer. It’s highly unlikely that this show will ever turn up again onstage, so the cast album is a bona fide hothouse curiosity. For years, this recording was available on CD only as part of the five-disc boxed set Eartha Quake, from the Bear Family, but it was later packaged as a Stage Door CD that also includes the New Faces of 1956 cast album. — Richard Barrios