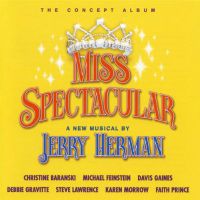 (4 / 5) A planned 2001 production of Jerry Herman’s Miss Spectacular in Las Vegas never materialized, but this concept recording is a doozy, featuring the kind of cast that any theatrical producer would have had to empty his and many others’ wallets to sign. Performing at their best are Debbie Gravitte, Michael Feinstein, Faith Prince, Christine Baranski, Karen Morrow, Davis Gaines, and Steve Lawrence; the last-named singer robustly delivers a paean to Las Vegas that cutely includes the names “Steve and Eydie.” The plot of the musical concerns Kansas expatriate Sarah Jane Hotchkiss, who has come to Vegas to enter a competition to be chosen as spokeswoman for the Spectacular Hotel, all the while remaining emotionally tied to the boy back home. Herman’s songs are on a par with the composer-lyricist’s best work. Not only is there a banjo-heavy anthem called “Sarah Jane” to rank with the title songs “Hello, Dolly!” and “Mame,” there’s also a love song, “No Other Music,” that’s one of Herman’s finest ballads; happily, it gets a perfect reading by the great Morrow. Feinstein beautifully delivers the lush “Ziegfeld Girl,” a tribute to showgirl pulchritude. An 18-member chorus and a large orchestra are conducted by the redoubtable veteran Donald Pippin, who also did the vocal arrangements; Larry Blank provided the string-and brass-prominent orchestrations. The plot of Miss Spectacular isn’t a world-beater, so this recording may well turn out to be the best-ever realization of the piece. — David Finkle