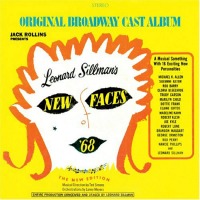 (2 / 5) If you want to know what killed the traditional Broadway revue, this cast album provides two answers: economics and a bankruptcy of imagination. New Faces series impresario Leonard Sillman himself is on hand here to introduce the talent. And there is talent: Madeline Kahn, Robert Klein, the forgotten Marilyn Child. But even though much of the material is by series veterans Ronny Graham, June Carroll, Arthur Siegel, and Murray Grand, it sounds like stuff you’d hear on the Straw Hat Circuit. A mistress of ceremonies, Gloria Bleezarde, reads her intros weakly, and what she’s introducing seldom soars. The running gag of Brandon Maggart (he of the big, silly voice) singing terrible special material by composer-lyricist Clark Gesner collapses right out of the gate, but plods on and on. Sociological historians might enjoy the pseudo-hipness of it all; the glimmerings of Women’s Lib can be detected in Child’s rendition of “Where Is Me?”, and M. K. Allen’s bad-black-dude turn in “Evil” sounds like a warm-up for Super Fly. Most of the rest sinks, but there is one moment of glory: Kahn’s peerless Lotte Lenya sendup, “Das Chicago Song.” Now, here was a New Face worth discovering! — Marc Miller