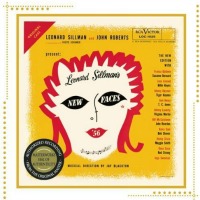 (4 / 5) While it didn’t create as big a sensation as New Faces of 1952, this revue boasted another impressive roster of  performers. Front and center is T.E. Jones, a gifted mimic, comedian, and female impersonator, who opens the album as a boozy, befuddled Tallulah Bankhead. A grab bag of material written by various songwriters is performed by such talents as big-voiced belter Amru Sani, the slyly hep Tiger Haynes, baritone John Reardon, ingenue Inga Swenson, and the comediennes Billie Hayes and Jane Connell. (The latter’s performance of “April in Fairbanks” recalls the beloved “Boston Beguine” of the 1952 edition.) A young Maggie Smith is uproariously funny in “One Perfect Moment,” a love ditty in which her voice becomes more piercing as her rapture escalates. “Isn’t She Lovely?” is best of all, a devastating parody of a Bankhead-headlined edition of the Ziegfeld Follies that had been a recent flop. The wordplay here is hilarious, and so is Reardon’s turn as a dreadful, off-key revue tenor. Note: This cast album is also available on a Stage Door CD that includes Eartha Kitt in Mrs. Patterson, a curiosity from 1954.– Richard Barrios