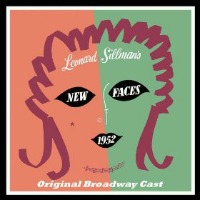 (2 / 5) Broadway once thrived on clever little revues in which clever young people satirized whatever was topical along the Great White Way and in the news. Once considered the height of sophistication, they might as well be written in Sumerian for all that they have to offer modern audiences — with, of course, a few songs and skits as timeless exceptions. New Faces of 1952, created by a legion of writers including Sheldon Harnick, is considered a classic of the genre, perhaps because it launched so many careers. Alice Ghostley sings “The Boston Beguine,” a moody Latin ballad about the city of beans and Brahmins, and a pre-Hogan’s Heroes Robert Clary romps as a romantic Frenchman in “Lucky Pierre.” A minor presence on the cast album is Paul Lynde, who had very little musical material in the show. It’s all very cute and negligible. Among the most enjoyable items, Virginia de Luce performs “He Takes Me Off His Income Tax,” while Eartha Kitt sizzles her way through the faux-French “Bal Petit Bal” and vamps as a world-weary playgirl in “Monotonous.” — David Barbour