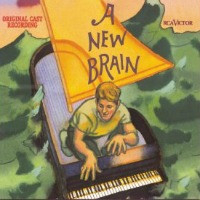 (4 / 5) Those who find much of William Finn’s work too abrasive should check out this moving and original musical about serious illness. In collaboration with librettist James Lapine, composer-lyricist Finn brings comedy and feeling to this most unlikely subject. Malcolm Gets stars as Gordon, a frustrated songwriter; when he’s diagnosed with a brain tumor, his family and friends rally around. The score mixes Finn’s neurotic, hilarious brand of kvetching with some ballads that reflect a new-found serenity in his work. Among the comic highlights are “And They’re Off,” a recounting of Gordon’s troubled family history; “Poor, Unsuccessful, and Fat,” the lament of a nurse (Michael Mandell); and “The Homeless Lady’s Revenge,” sung by a resourceful derelict (Mary Testa). The album’s real gems are “The Music Still Plays On,” a torch song delivered by Gordon’s mother (Penny Fuller); and the final ballad, “I Feel So Much Spring,” in which many aspects of Gordon’s life come into harmony. There’s also good work from Chip Zien as a malevolent TV host, and amusing contributions by the pre-star Kristin Chenoweth. In the role of Gordon’s lover, Norm Lewis fills in for original cast member Christopher Innvar (who left the show due to vocal problems) and offers a dreamy performance of the love song “Sailing.” — David Barbour