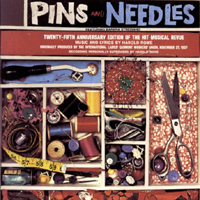 (3 / 5) This 1930s topical revue is legendary for its original cast of talented shop workers from the International Ladies’ Garment Workers Union. Featuring songs by Harold Rome and sketches by Marc Blitzstein (among others), Pins and Needles wore its pro-labor, pro-union bias on its sleeve. But, in a bid for popularity, the writers pulled their punches. What began as mild political satire became anodyne as, over the course of a three-year run, new material — some of it by John Latouche — was interpolated. The show began performances in 1936 at the Labor Stage, but didn’t open officially until 1937. It later moved uptown, spawned a national tour, and ultimately was seen by more than a million theatergoers in New York and on the road. With a run of 1,108 performances, it held the longevity record for Broadway musicals prior to Oklahoma! This recording, made to commemorate the revue’s silver anniversary, saved Rome’s perky ditties from being lost (as were many of the show’s sketches), and has ensured that Pins and Needles is one of the few early Broadway revues known for its entire score rather than just for the odd “standard.” The music, originally arranged for two pianos, is played here on piano, guitar, bass, and drums under the direction of Stan Freeman. The vocalists — including Rome himself, Jack Carroll, Rose Marie Jun, Alan Sokoloff, and the 20-year-old Barbra Streisand — are very engaging. The charm of numbers such as “Sing Me a Song of Social Significance,” “Not Cricket to Picket,” and “Doing the Reactionary” compensates for the recording’s audio flaws.  — Charles Wright