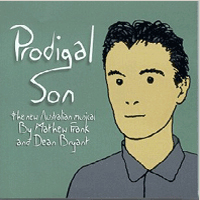 (3 / 5) Australian librettist-lyricist Dean Bryant and composer Matthew Frank took inspiration from the Bible for their musical Prodigal Son. They updated the story to present-day Australia and made the central figure of the straying son returning to the fold a young man named Luke, who’s coping with his homosexuality. As the recording reveals, this is an intimate show, with only piano accompaniment played by the composer. The score deals with the larger implications of small issues, capturing the oppressive aspects of an everyday rural existence (“Happy Families”) and the allure of a life with more choices (“Run With the Tide”). Several moving songs express the growing pains experienced by children (“Out of Myself,” “Epiphany”) as well as their parents (“My Boy,” “Love Them and Leave Them Alone”). Bryant himself gives an engaging performance as Luke; Jules Hutchinson is persuasive as his mother; Barry Mitchell is a bit bland as Luke’s father; Graham Pages is adequate in dual roles as Luke’s brother and boyfriend; and Amanda Levy as Maddy, a performance artist, gives fine if undistinguished support. The disc includes a bonus track of a song from a subsequent Bryant-Frank musical, Emoh Ruo, sung by Levy.  — Matthew Murray 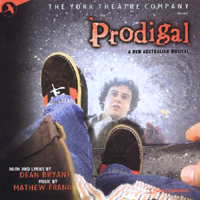 (3 / 5)The title of Bryant and Frank’s musical was shortened to Prodigal for its 2002 York Theatre production, but the show lost none of its emotional power on the journey from Australia to New York. In fact, this recording has more energy and humor than the original. Joshua Park embodies Luke’s youth and naivete very well, and Kerry Butler makes Maddy a force to be reckoned with. David Hess and Alison Fraser depict Luke’s parents with plenty of outer strength to mask the fragility of their frightened inner selves. The only weak link is Christian Bode in the boyfriend/brother roles, which seemed vital onstage but aren’t well established through song. Australian musicals with original scores don’t often show up in America, but this recording makes an excellent case for Prodigal. — M.M.