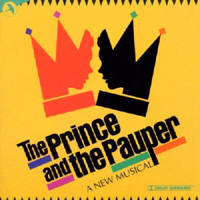 (2 / 5) Based on Mark Twain’s novel about a pair of 16th-century London lookalikes who swap identities, this adaptation of The Prince and the Pauper played a respectable 194 performances Off-Broadway. With music by Neil Berg, lyrics by Berg and Bernie Garzia, and a book by Garzia and Ray Roderick, the show is an adventure-soaked musical with pop-opera inflections. The score is sprightly, performed by a strong cast of 13 singing actors, many of whom play multiple roles and give their all on this recording. Most notable for their talent and energy are Dennis Michael Hall as the Tudor prince who pretends to be a commoner and Gerard Canonico as the slum lad masquerading as royalty. John Glaudini’s orchestrations and arrangements, played by a three-person combo — Glaudini on piano, Anne-Marie Tranchida on cello, and Frank Basile on reeds — lend a full, swashbuckling sound to the proceedings. True to Twain’s source material, this is a children’s piece with enough satiric edge to be enjoyed by adults as well. — Charles Wright