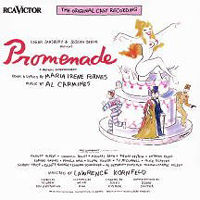 Original Off-Broadway Cast, 1969 (RCA) ]usr=1] Two prisoners identified as “105” and “106” escape from jail and wander through various settings, including a park, a banquet, and a battlefield. Among the people they encounter are Mr. R., Mr. S., Miss 0, and a bereaved woman who thinks she’s their mother. At the end of the day, they return to prison. Only in the 1960s could something like this get a commercial production, let alone achieve a half-decent run and earn a measure of critical respect. Promenade is obvious in its details — the usual points are made about rich and poor, there’s a scene spoofing the foolishness of war, and so on — and utterly impenetrable in its overall intentions, but the show gained a following in its seven-month run at the theater of the same name. Today, it seems just another baffling artifact of an era when plot and character were regularly thrown to the wind. Maria Irene Fornes is the gnomic librettist-lyricist. Composer AI Carmines’ melodies owe a debt to Kurt Weill, but there are several catchy tunes. Among them are “Unrequited Love,” “The Clothes Make the Man,” and “Capricious and Fickle,” the latter belted by Alice Playten. As recorded, the score is not unpleasant, but neither is it compelling. — David Barbour