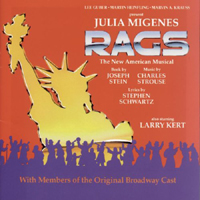 (4 / 5) High on the list of flops that deserved better is this four-performance heartbreaker by composer Charles Strouse and lyricist Stephen Schwartz. The reviews ranged from respectful-bad to whiny-bad, with most of the bile reserved for Joseph Stein’s fragmented book. Maybe the show, set on the Lower East Side of Manhattan in 1910-11, had too much happening in terms of plot; three love stories, multiple immigrant experiences, ward-heeler intrigue, and so on. To many, the leftist agitprop spirit got in the way of the story. But what a score! Like master illusionists, Strouse and Schwartz put a mirror up to early-20th-century song styles and produced a reflection brighter than the actuality. Irish ballads, Yiddish folk music, vaudeville specialty numbers, patriotic marches, ragtime tunes — they’re all here, only smarter and more sophisticated than their original models, and packed with meaty ideas. The show’s top-billed star, Teresa Stratas, elected not to record the album, so Julia Migenes was brought in. With a stunning voice and plenty of fire, she makes an excellent Rebecca Hershkowitz. And she is surrounded by an A-list company. Judy Kuhn is remarkable in the title song, pouring anger, regret, and contempt into a rollicking Strouse rag. Marcia Lewis and Dick Latessa wring laughs and poignancy out of “Three Sunny Rooms.” Terrence Mann and Lonny Price are fine in their roles, and Josh Blake is as non-irritating as child singers come. Only Larry Kert, as Rebecca’s husband, doesn’t quite convince; he’s okay from a vocal standpoint, but he doesn’t seem to inhabit the character. The recording includes “Cherry Street Cafe” and “Nothing Will Hurt Us Again,” two songs dropped from the show for the Broadway run. They’re welcome bonuses to a score that’s a rich panorama of the American dream in old New York. If you alphabetize your cast albums (and who doesn’t?), this one goes right before Ragtime. As sweeping musical storytelling, it’s not far behind. — Marc Miller 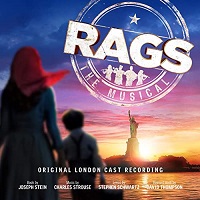 (3 / 5) Rags seems to be one of those titles, like Mack and Mabel and Merrily We Roll Along, that people are always trying to fix and never quite succeeding. This West End revisal, based on one a couple of years earlier at Goodspeed Opera House, has a new book by David Thompson that solves some of the original’s problems and creates others, and a heavily reworked score. Characters are dropped and added, songs rewritten and reassigned, and there are several new numbers, especially in the first act. Carolyn Maitland is an ardent Rebecca, if not vocally in the same class as Julia Migenes (or Teresa Stratas). She does well by the title song, though Thompson had to put the plot through wild contortions in order to hand it to her. Dave Willetts and Debbie Chazen are lovely on “Three Sunny Rooms,” but turning that number into a quartet (they’re joined by Martha Kirby’s Bella and Oisin Nolan-Power’s Ben) robs it of some of its charm. Among the new songs, “Meet an Italian” and “If We Never Meet Again” are standouts, and while Nick Barstow’s orchestrations are hardly Broadway-size or Broadway-caliber, they get the job done. It’s a full album, and it’s fun to compare it with the original, noting the musical and lyrical detours Strouse and Schwartz took, and pondering why they took them. Not a must-have, but a pleasant sidekick to the 1.0 version. — M.M.