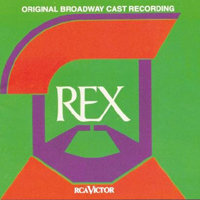 Original Broadway Cast, 1976 (RCA) No stars; not recommended. This late-career Richard Rodgers flop, about the marital problems of Henry VIII, revealed the composer to be out of touch with contemporary Broadway. He wasn’t the only one: Librettist Sherman Yellen and lyricist Sheldon Harnick couldn’t decide if Henry, played by Nicol Williamson, was a monster of ambition and ego or a misunderstood paterfamilias like Captain von Trapp. Yellen’s big gimmick was to have Penny Fuller appear in Act I as Anne Boleyn and in Act II as her daughter, Elizabeth I; this created a neat psychological triangle with Henry, but the show’s melodies are often slow and stentorian, while the lyrics explain themselves to death. The best items are the opening madrigal “No Song More Pleasing” and the Henry-Anne ballad “Away From You.” The rest of the cast album is taken up by such awful numbers as “The Chase,” in which the men of the court keep score of Henry’s conquests, and “In Time,” a solo for Elizabeth that sounds like a first draft of “Do-Re-Mi.” (On the plus side, Irwin Kostal’s orchestrations frequently have a pleasant Renaissance patina.) Williamson croons mournfully through seemingly dozens of songs wherein he complains about the lack of an appropriate heir. Stargazer alert: Glenn Close can be heard in one or two numbers as Mary Tudor. — David Barbour