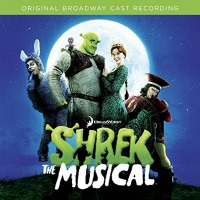 (3 / 5) Not to be outdone by Disney, the Dreamworks company decided to come to Broadway with a musical adaptation of its Oscar winning animated film Shrek, about an everyman ogre trying to maintain his peace of mind while wading through numerous fairy tales — some of which aren’t quite so magical. While the original Broadway production proved to be wildly over-produced and too loyal to the film in terms of its design and book, the cast recording reveals that, at its core, Shrek has considerable charm and a solid score aided by Danny Troob’s healthily full orchestrations. It’s not a surprise that composer Jeanine Tesori brought a mixture of earnestness and funky independence to the piece, but it is a surprise that first-time lyricist David Lindsay-Abaire crafted such well-structured and genuinely witty lyrics. The score boasts a fair number of highlights, such as “I Know It’s Today” and “When Words Fail,” though some songs try too hard for off-kilter humor  — for example, “Story of My Life” and “What’s Up, Duloc?” In the title role, Brian d’Arcy James had to balance his own musical theater instincts with the burden of recreating a highly beloved film character; for the most part, he succeeded, especially in the touching “Who I’d Be.” Sadly, the talented Daniel Breaker was not given as much artistic freedom in the role of Shrek’s best friend Donkey, and instead offers an Eddie Murphy impression through much of this cast album. More successful principal players include Sutton Foster as not-your-average-princess Fiona, going toe to toe with James in the childishly gleeful “I Think I Got You Beat,” and Christopher Sieber as the hyper-sinister, height-challenged villain Lord Farquad. In their score, Tesori and Abaire gave Shrek a mischievous soul that was sadly lost among the giant scenery of the original production. Luckily, it’s captured here. — Matt Koplik