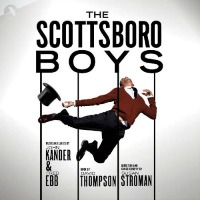 (5 / 5) In several of their shows, John Kander and Fred Ebb have used various types of entertainment as the contextual setting for exploring historical and social issues. In Cabaret, sleazy nightclub routines parallel the excesses of Weimar Germany and the rise of Nazism; Chicago‘s vaudeville acts reveal the corrupt justice system of the Roaring Twenties. In The Scottsboro Boys, the tragic story of nine young African Americans who were unjustly accused of raping two white women in 1931 is told in the form of a minstrel show. The result is a searing, brilliant work with depth, power, and guts. Kander says they chose the format for the opportunities it provided: an ensemble, led by an Interlocutor (John Cullum), telling stories, jokes and songs. Mr. Bones and Mr. Tambo (the versatile Colman Domingo and Forrest McClendon) assist by playing multiple characters (“White men’s our speciality”). Needless to say, the minstrel show itself is a stark reminder of racism, reinforcing social injustice with every number. In the rousing opener, the lead among the accused men, Haywood Patterson (the impressive Brandon Victor Dixon), asks “This time, can we tell it like it really happened?” The Interlocutor benignly replies, “Of course.” Haywood’s resolve to tell the truth provides the score with a constant refrain, from his first defense (the Bert Williams style “Nothin'”) to the comic fable “Make Friends With the Truth” to “Zat So?” His defiant cry “You Can’t Do Me” sets up the boys’ refusal of the Interlocutor’s call for a cakewalk and a “happy ending,” subverting the minstrel show. The fates of the real-life Scottsboro Boys were anything but happy, but the final scene places their case in the broader context to the civil rights movement, giving a glimpse of a better future. The score also contains one of Kander & Ebb’s finest songs, the poignant “Go Back Home,” with a beautiful, wistful melody that reoccurs throughout the underscoring. (A bonus track has Kander performing the number.) Throughout the recording, Cullum shines as the unctuous Interlocutor, his genially racist attitude clear in “It’s Gonna Take Time” (cut from the subsequent Broadway production) and “Southern Days.” The Interlocutor misses Mammy’s ribs and mint juleps, but conveniently forgets the lynchings and cross-burnings. Domingo and McClendon’s talents are also evident throughout, especially when they assume the guises of the Attorney General and lawyer Samuel Liebowitz in savagely satirical numbers revealing Southern anti-Semitism and patronizing New York showmanship. (“Just ask my chauffeur, Rufus!”) Here was no easy subject, but this musical may be Kander and Ebb’s most important work; three years after the show opened, the Scottsboro boys were granted a posthumous pardon. — Laura Frankos 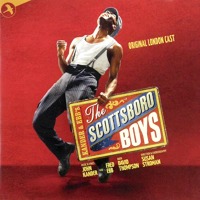 (4 / 5) This cast album bears a close similarity to the 2010 version. Three of the principals crossed the Atlantic to appear in the London production of The Scottsboro Boys: Brandon Victor Dixon as Haywood Patterson, Colman Domingo as Mr. Bones, and Forrest McClendon as Mr. Tambo. Dixon may even be better here, displaying heightened exuberance in “Commencing in Chattanooga” and enormous inner strength in “You Can’t Do Me.” The ensemble numbers sound more polished, and there are some lyric changes, notably in “Make Friends With the Truth.” There’s also a bit of additional dialogue, with more details about the fate of these young men. The Interlocutor’s solo, “It’s Gonna Take Time,” was cut from the Broadway production and is absent here, but the exit music is included. Like the earlier recording, there’ a bonus track of “Go Back Home,” here performed by Dixon. A key difference between the two albums is the Interlocutor, played nastily here by Julian Glover. Where John Cullum was  generally sly, Glover is more commanding, sending chills as he insists, “Shake those tambourines!” When he describes himself as “the master of these folks” in the opener, the listener can’t help thinking he means more than just master of ceremonies. Does a collector need both recordings? Probably not. But those considering staging the show may want the London one, which is closer to the licensed version. — L.F.