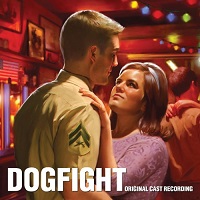 (3 / 5) Many musical scores can stand perfectly well as cast recordings, separate from their staged productions. Others lose something when deprived of the character and plot development revealed in the shows’ libretti. For all its virtues, Dogfight — songs by Benj Pasek and Justin Paul, book by Peter Duchan — falls within the latter group. Based on the 1991 film, it’s the story of some Marines tearing up San Francisco in late 1963, the night before they ship out to Vietnam. They plan a “dogfight,”  a contest in which each jarhead contributes fifty bucks to a kitty that will be won by the guy who brings the ugliest date to the party.  A nasty game, indeed — and the boys, including lead Eddie Birdlace (Derek Klena), appear as insensitive, hot-blooded louts. Fresh out of boot camp and convinced that they’re invincible, their pickup lines in the song “Hey, Good-Lookin'” are lies and braggadocio. Eddie finds a waitress, Rose (the sweet-voiced Lindsay Mendez), and pressures her to “Come to a Party” while privately exulting over his chances of winning the dogfight. Rose, for her part, is thrilled to be going out with a boy; in “Nothing Short of Wonderful,” she dithers over what to wear in staccato phrases, sounding like a mashup of Cinderella and the Baker’s Wife from Into The Woods. (The opening vamp of the title song also echoes that Sondheim show.) Clearly, this evening will not go well for Rose. But, sometime between the invitation and the party, Eddie has a change of heart that isn’t part of the score, although it’s described in the recording notes. The libretto shows us how Eddie grows to like Rose as they walk to the party, but none of that is in the score; on the album, he jumps from acting like a complete cad to trying unsuccessfully to take Rose home before the judging, in order to save her the embarrassment. Similarly, the recording doesn’t include Eddie’s later apology or indicate how the relationship progresses. Still, there’s much to appreciate here. Pasek and Paul know how to craft effective theater songs with nuance and layers. A few of the lyrics are a little too facile in telegraphing emotions or a sense of time and place, but most are very well written. The music ranges from early-sixties pop to Rose’s folk songs and powerful, revealing character numbers. “Come to a Party” works on multiple levels as variously sung by the callous Marines, the naive Rose, or Marcy, a knowing prostitute (played with sledgehammer bluntness by Annaleigh Ashford). The boys’ cockiness is evident as they take the town in “Some Kinda Time” and plan their big homecoming in “Hometown Hero’s Ticker Tape Parade.” Reality shatters their hopes, and Eddie’s devastating “Come Back” portrays what the war has done to him. But Rose is the real star here, and her journey comes through best in the score. She’s alternately shy and manic at first, then furious at the “Dogfight,” and soul-searching in “Pretty Funny.” The show’s emotional crux is found in her song “Before It’s Over,” when she realizes she has somehow benefited from the dreadful experience. As noted above, Eddie’s character growth isn’t charted as well in the songs, but this is still a solid score that tells a compelling story. — Laura Frankos