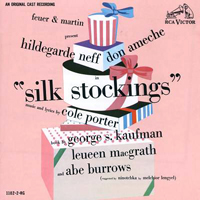 (4 / 5) Cole Porter’s last Broadway show is a charming and sophisticated musical based on the Greta Garbo film Ninotcka. Only Porter could have given that heady cinematic masterpiece the urbane and romantic musical touch that it deserved. Set against an enticing Parisian background that inspired one of the great composer-lyricist’s most sensual love songs, “All of You,” Silk Stockings has a score that also includes the melodic and witty “Paris Loves Lovers,” the smoldering title song, the comedic “Stereophonic Sound” and “It’s a Chemical Reaction, That’s All,” the swinging “Satin and Silk,” and the jazzy “Red Blues.” A strong cast is headed by Hildegarde Neff as Ninotchka, a dour Russian official visiting Paris, and Don Ameche as a slick American talent agent. Gretchen Wyler is a particular delight in a supporting role, displaying plenty of spunk when belting out hilarious Porter lyrics in “Stereophonic Sound.” (Sample: “If Zanuck’s latest picture were the good, old fashioned kind / There’d be no one in front to look at Marilyn’s behind…”) This recording has lots of sensational lyrics that were considered too risqué for the film version of Silk Stockings, yet it’s not perfect; the production numbers sound a bit frenetic, and even the overture is rushed. — Gerard Alessandrini 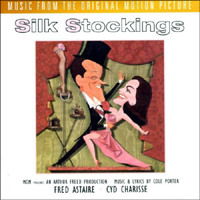 (4 / 5) The treatment of Porter’s score by André Previn and the MGM orchestra is flawless, with musical arrangements and orchestrations far more dazzling than the Broadway originals. Fred Astaire was perfectly cast in Silk Stockings as the male lead, but Cyd Charisse was less well suited to the role of Ninotchka — a moot point when it comes to the soundtrack album, since Charisse’s singing was dubbed by Carol Richards. Janis Paige, Jules Munshin, and Peter Lorre (!) in his only musical are all great fun. Although the movie itself isn’t considered a top MGM musical, the soundtrack is definitely a winner. Previn’s conducting of “The Red Blues” and “Stereophonic Sound” is exciting, the lush orchestrations for Astaire’s vocal and dance in “All of You” are gorgeous, and added to the score are two songs that were written by Porter especially for Astaire; one of them, “Fated to Be Mated,” is a real treat. The only disappointment of this recording is the ridiculous censoring of some lyrics that were considered too explicit for movie audiences of the day. How amazing that an American film released in 1957 couldn’t contain the lines, “If Ava Gardner played Godiva riding on a mare / The people wouldn’t pay a cent to see her in the bare…” — G.A.