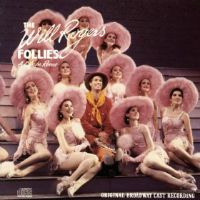 (3 / 5) Chameleonic composer Cy Coleman and stalwart Broadway lyricists Betty Comden and Adolph Green wrote the songs for The Will Rogers Follies, a fanciful musical biography of the populist humorist as might have been concocted by Florenz Ziegfeld, in whose revues Rogers made numerous appearances. Coleman combines country twang and Broadway know-how in his music (evocatively orchestrated by Bill Byers), and the Camden-Green lyrics are bright and clever. If the score isn’t of first-tier quality, it’s better than just utilitarian; but it’s hard to tell that from the cast recording, a rather lackluster audio presentation of a show that burst with life under Tommy Tune’s direction. The cast certainly isn’t to blame: Keith Carradine is ingratiating as Rogers, Dee Hoty’s velvet voice brings Will’s wife Berry to warm-hearted life, and future Tony Awards winners Dick Latessa and Cady Huffman find great charm and humor in their supporting roles. But the score, separated from the energy of Tune’s direction/choreography and Peter Stone’s book, is less than wholly effective on its own. The dynamic production numbers “Will-a-Mania” and “Our Favorite Son” suffer the most, but even the major solo turns — Carradine’s “I Never Met a Man I Didn’t Like” and Hoty’s show-stopping “No Man Left for Me” — are somewhat disappointing here. Still, the music’s attractiveness and the performers’ abundant talents save the day, making a weak representation of the show still well worth a listen or three. — Matthew Murray