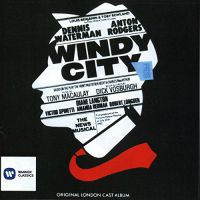 (3 / 5) Much of Tony Macaulay’s music is too pop-rocky for an adaptation of the classic 1920s Ben Hecht-Charles MacArthur comedy The Front Page, but Macaulay and the gifted lyricist Dick Vosburgh created many songs for Windy City that are terrific in their own right, so the show scores on this recording in a way that it never did onstage. The story of ace newspaper reporter Hildy Johnson (played by Dennis Waterman) wanting to abandon his boss Walter Burns (played by Anton Rodgers) for marriage and a different career is outfitted by Macaulay and Vosburgh with several intoxicating numbers (“Hey, Hallelujah,” “I Can Just Imagine It,” and the title song), some lovely ballads (“Wait Till I Get You on Your Own,” “Long Night Again Tonight”), and only a couple of clunkers (“Waltz for Mollie,” “Bensinger’s Poem”). When the chorines sing “Saturday,” which does sound like a 1920s tune, it reminds us how out-of-period the other songs are. Still, “Water Under the Bridge” is a terrific 11-o’clock number and would be a great audition song for strong leading men. — Peter Filichia