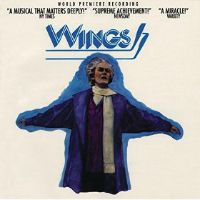 (3 / 5) Composer Jeffrey Lunden and lyricist-librettist Arthur Perlman deserve credit for tackling such difficult source material: Arthur Kopit’s acclaimed play Wings, about a former aviatrix and stunt pilot who’s recovering from a stroke. Their score for the musical is complex and multi-layered; if it doesn’t quite reach the skies, it doesn’t crash, either. Much of the music is exquisite, but the style of the score is more like a chamber opera. There’s very little in the way of “numbers,” some of the vocal lines are curious, and the lyrics often eschew rhyme. However, there is one song that’s likely to please those looking for an old-fashioned melody: “A Recipe for Cheesecake,” here sung by Russ Thacker, the only performer on the album who wasn’t in the stage production. It’s as close to a “show tune” as Wings gets. The strange noises you’ll hear at several points during the recording are part of a complex melding of sound design (Richard Woodbury) and orchestration (Lunden), designed to simulate the scary world inside the head of the central character, played by Linda Stephens. Recorded several years after Wings premiered at Chicago’s Goodman Theatre and then moved to New York’s Public Theater, this one-disc album contains nearly the entire show, dialogue and all. It was superbly produced by Thomas Z. Shepard; listen through headphones for the full effect. — Seth Christenfeld