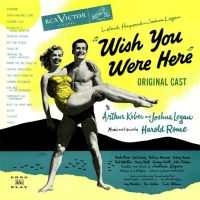 (3 / 5) Eddie Fisher’s mega-hit recording of the title tune helped turn this Catskills summer romance, based on Arthur Kober’s play Having Wonderful Time, from an almost certain flop into the biggest success of a slow season. But there’s much more to Harold Rome’s score for his first book show to reach Broadway than that repetitive rumba. The other ballads are uncommonly fine, from the intense “They Won’t Know Me” to the elegant melodic line of “Where Did the Night Go?” All of the above are lucky to be sung by Jack Cassidy; with his thrilling tenor and ardent delivery, he’s the best thing on the album. His leading lady, Patricia Marand, is technically proficient but a little stolid, and soubrette Sheila Bond hits some harsh, nasal notes, but Paul Valentine sings “Summer Afternoon” attractively. As befits a snappy musical of its period, Wish You Were Here has a steady stream of tangy comedy songs and a brassy set of Don Walker orchestrations, nicely matched by some excellent, uncredited vocal arrangements. Larry Blyden, Phyllis Newman, Florence Henderson, and Reid Shelton are in the chorus, though you probably won’t be able to pick out their voices. — Marc Miller 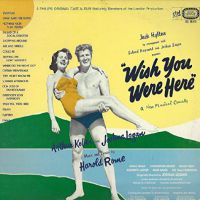 (4 / 5) London cast recordings of Broadway hits are often inferior to the originals, but this one bests its American cousin on several counts. The technical quality is superb, once you get past an echo-y overture that seems like it was lifted directly from the Broadway album. Cyril Ornadel’s musical direction is livelier than Jay Blackton’s. The musical program is almost the same, although “Goodbye, Love” is replaced by “Nothing Nicer Than People” to make the heroine more sympathetic. It’s fun to note the slight lyrical revisions that were made to suit West End audiences, such as changing “the BMT” to “the workmen’s train.” All of the Brit principals affect New York accents quite nicely, with Christopher Hewett outstanding as the unlikeliest wolf in the history of the Catskills. The rest of the London cast is inversely talented as compared to the New York company: Where Jack Cassidy was the vocal muscle of the original, his London counterpart, Bruce Trent, is uninteresting (and requires a downward modulation in “They Won’t Know Me”); but Shani Wallis is pert and more vocally secure than Sheila Bond as Fay, and Elizabeth Larner’s Teddy has the edge on Patricia Marand’s. They all sound like they’re having a whale of a summer. — M.M.