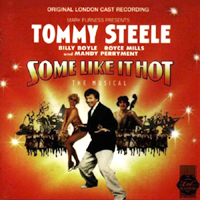 Original London Cast, 1992 (First Night) No stars; not recommended. Twenty years after the musical Sugar played on Broadway, this revised, retitled version showed up in London. Judging from the cast album, Tommy Steele, who directed and starred in the show, made some peculiar decisions — not the least of which was playing the wrong part. Instead of taking the role of Daphne (Robert Morse on Broadway, Jack Lemmon in the classic 1959 film Some Like It Hot), he opted for the romantic Tony Roberts/Tony Curtis part. Unfortunately, this character has the dullest material in the musical. Yet Steele is all over the recording, while Daphne and Sugar (the Marilyn Monroe character) have very few songs. The Jule Styne-Bob Merrill score has been treated cavalierly; for instance, the opening number is now Scott Joplin’s (uncredited) “Maple Leaf Rag.” Several songs have been cut, some have been combined with others, lyrics have been rewritten throughout, and there are odd interpolations. “I’m Naive,” a fine song from a Styne-Merrill TV musical, has been inappropriately handed to Sugar. Worse, the amusing “November Song” from Sugar has been replaced by “Dirty Old Men,” with music and lyrics by Merrill, originally written for Breakfast at Tiffany’s. There’s also an uncredited title song. — David Wolf