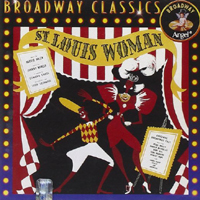 (4 / 5) Careening between musical comedy and musical tragedy, St. Louis Woman is a turn-of-the-century tale with an all-black cast and a score by Harold Arlen and Johnny Mercer that reflects the tonal uncertainty at both ends of the comedy/tragedy spectrum. One minute, the score strives for Porgy and Bess-like grandeur (“Leavin’ Time”), then it returns to standard-issue, albeit high-grade, Broadway (“Ridin’ on the Moon”). But Arlen’s music is amazing throughout, Mercer’s lyrics are adult and idiomatic, Leon Leonardi’s conducting is sensational, and the singers are terrific. June Hawkins infuses “I Had Myself a True Love” and “Sleep Peaceful, Mr. Used-to-Be” with operatic intensity. Ruby Hill is warm and appealing in “Lullaby” and sassy in “Anyplace I Hang My Hat Is Home.” Harold Nicholas was a great dancer without much of a voice, but he comes through in “Come Rain or Come Shine.” And a young Pearl Bailey is always in the wings, ready to deliver another insinuating comic specialty number. At just under 30 minutes, this is an uncommonly short cast album, but also an uncommonly sweet one. And the sound quality, for its age, is excellent. — Marc Miller 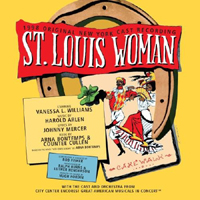 (2 / 5) This album captures every note of a City Center Encores! concert staging of St. Louis Woman on a recording that’s more than twice as long as the original. But from the first few bars — a portentous drum roll, a brassy fanfare, a showy parade of unrelated themes — it disappoints. The original orchestrations have been tarted up with Vegas obviousness, and the big songs are punctuated with even bigger “buttons” at the end. (You’d think “Come Rain or Come Shine” was the “Eroica.”) Conversely, Rob Fisher’s conducting is strangely cautious, as though applying some heat to the score might scorch it. (Listen to the middle section of “Leavin’ Time,” so deliberate that it sounds like a school band is playing it.) To be sure, it’s terrific to have all the missing material restored for a recording; “I Feel My Luck Cornin’ Down” and “Li’l Augie Is a Natural Man” are joyous rediscoveries. But this cast doesn’t make much of the score’s riches. Vanessa Williams is a pleasant vocalist, but her much-vaunted va-va-voom doesn’t carry over to disc, and she’s short on individuality in the role of Della. Helen Goldsby’s Lila is a disaster as she mumbles her lyrics and sings stiffly. Leading men Stanley Wayne Mathis and Victor Trent Cook are competent but vapid. Only Yvette Cason measures up, offering a take on Butterfly that’s very different from but equally valid as that of Pearl Bailey. — M.M.