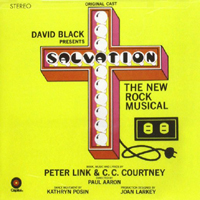 (3 / 5) Unlike some other rock musicals of the period, Salvation had no dance or spectacle elements; the physical production was tacky, and the show played in an ungainly Off-Broadway space. Yet the songs, by Peter Link and C. C. Courtney, are uncommonly sweet and melodic. The style of the music is so time-specific that, to some modern ears, it may be meaningless. Still, there’s a touching simplicity in “Let the Moment Slip By,” all about a young woman who didn’t sleep with her boyfriend and regrets it after he’s killed in Vietnam. “Daedalus” is at once an odd and ravishing tune, especially as performed by jazz singer Yolande Bavan. “In Between,” “Gina,” “Let’s Get Lost in Now,” and “If You Let Me Make Love to You, Then Why Can’t I Touch You” are arresting ’60s rock. The cast, which includes songwriters Link and Courtney along with Joe Morton, Chapman Roberts, Marta Heflin, and Annie Rachel, is vocally strong. The CD edition of the cast album includes three songs that previously had been issued only on the eight-track tape version of the recording. — David Wolf