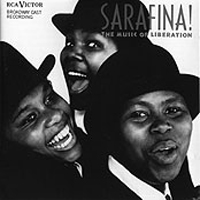 (4 / 5) Conceived and directed by Mbongeni Ngema, Sarafina! is the “little musical that could.” Despite considerable financial hardship in moving the show to production, it premiered in Johannesburg, South Africa and, within three months, was transported intact to New York for a limited engagement at Lincoln Center. It proved so popular there that it moved to Broadway, where it received five Tony Award nominations and ran for 597 performances. Sarafina! concerns apartheid and its repressive conditions as reflected in the lives of a group of high school students in Soweto during the 1980s. The title character is an endearing rebel who retains her zeal for civil rights despite harassment and incarceration. The score, by Ngema and Hugh Masekela, features the stomping dance rhythms, electronic keyboard, blasts of brass, and idiosyncratic vocal harmonies that are trademarks of Mbaqanga, the pop sound of South Africa’s black townships. The album offers exhilarating, letter-perfect performances that pulse and spin inexorably toward the climactic number, “Bring Back Nelson Mandela,” during which Sarafina (Leleti Khumalo) impersonates the then-imprisoned leader and imagines what he might say upon release. — Charles Wright 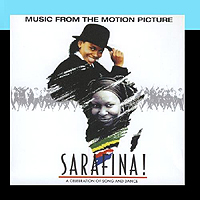 (2 / 5) The fair-to-middling film Sarafina! The Sound of Freedom, based on the exhilarating stage show Sarafina! The Music of Liberation, was released in 1992. The original musical captivated New York audiences in part because it depicted the ongoing injustice of South African apartheid and the then-current liberation movement; the film appeared a year after repeal of the apartheid laws. This soundtrack recording features various artists performing selections from the exciting musical score by Mbongeni Ngema and Hugh Masekela: Leleti Khumalo repeats her stage role of Sarafina, the irrepressible juvenile activist; the great singer and civil rights activist Miriam Makeba is her mother, who has slaved her whole life for members of the white ruling class; and Whoopi Goldberg plays Mary Masembuko, the audacious teacher who defies the state-sanctioned curriculum in order to inspire and indoctrinate Sarafina. Ngema, who conceived and directed the original stage musical, is on hand in the role of a constable  but has been displaced as director by Darrel James Roodt. The musical numbers, recorded under state-of-the-art conditions, are respectably performed but lack the exuberance and emotional range that make the original-cast recording so exciting. That’s hardly surprising; whereas the Lincoln Center/Broadway recording is like a handcrafted treasure from the workshop of a natural artisan, the film soundtrack is an aural document of a commercial enterprise trying to replicate that treasure for the masses. On stage, Sarafina! was lively agitprop that contributed appreciably to global support for the South African liberation movement. The screen version, coming after repeal of apartheid, celebrated change and anticipated the election that would make Nelson Mandela the country’s first black president two years after the movie’s premier. Almost a quarter century later, the film is a memento of concerted social action that proved things can get better. Despite the compromises necessary to get this bold material to mainstream screens, including star casting and the substitution of Roodt for Ngema, this 40-minute soundtrack recording is true to the spirit and purpose reflected in the original cast album, if not equal to it in quality or energy.  – C.W.