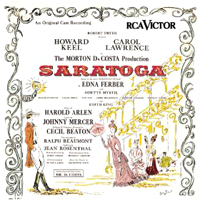 (3 / 5) Edna Ferber’s Saratoga Trunk had already been adapted as a hit film, so the stage musical version, developed for Broadway as Saratoga and rumored to be the most costly production of its day, was eagerly awaited. But the show turned out to be a crushing failure. Morton da Costa was in charge of both the book and the direction; Harold Arlen and Johnny Mercer supplied the songs. Tryouts were nightmarish, and Arlen departed in disgust, leaving Mercer to compose some of the music. The recording doesn’t reflect what was reportedly an exceedingly talky script, but it does reveal the score to have many incomplete musical statements: A nice melodic line suddenly stops without resolution; a jazzy rhythm has little to play against; and nothing is at all memorable. The cast was headed by Carol Lawrence, whose soubrettish manner falls flat, and Howard Keel, who sings well but without much individuality. The humorous “Finding a Man,” given its full due by Carol Brice and Odette Myrtil, is the closest thing to a big-time musical moment. — Richard Barrios