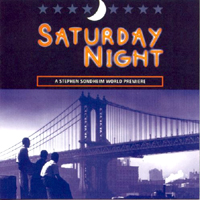 (1 / 5) With music and lyrics by a 24-year-old Stephen Sondheim and a book by Julius J. Epstein, Saturday Night was supposed to be produced on Broadway in the mid-’50s;  but there were problems, and the show didn’t have its first fully staged performance until four decades later in London. So this cast album of that production is the world premiere recording, documenting the show as presented at a fringe theater. The 12 British actors struggle with American accents, and although they don’t have much to offer as vocalists, they do exhibit great energy. Sam Newman is passable as Gene, but Anna Francolini is inept as a phony Southern belle. Six musicians play orchestrations that are competent but do not fully reveal the beauty of Sondheim’s music. — Jeffrey Dunn 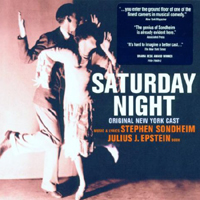 (5 / 5) Sondheim has described Saturday Night as his “baby pictures.” Although an anticipated move to Broadway for the 2000 Second Stage production did not happen, this lavish recording was made with 36 musicians! Jonathan Tunick’s excellent orchestrations, conducted by Steven Freeman, have the thrust of a 1950s Broadway musical, yet they sound entirely appropriate for 1929, the year in which Saturday Night is set. In the evocative, beautifully delivered title song that begins the show, four young men — played by Kirk MacDonald, Greg Zola, Joey Sorge, and Michael Benjamin Washington — lament that they are dateless on the biggest night of the week. Gene, the show’s central character, is introduced in “Class,” a complex melody perfectly sung by David Campbell. The young Australian leading man also uses his solid baritenor to excellent dramatic effect in the beautiful duet “Too Many People,” with Lauren Ward, and in the clever trio “A Moment With You,” which Campbell and Ward sing in counterpoint with a record. Ward is delightful in “Isn’t It?” and in the fine ballad, “All for You.” Other standouts are Christopher Fitzgerald in “Exhibit A,” slyly explaining to his buddies his modus operandi with women, and Andrea Burns and Clarke Thorell as a married couple cutely reminiscing about their first date in “I Remember That.” Wonderful group numbers — “Delighted, I’m Sure,” “In the Movies,” “One Wonderful Day,” and “What More Do I Need?” — fully reveal who the characters are and give all of the cast members chances to shine. — J.D.