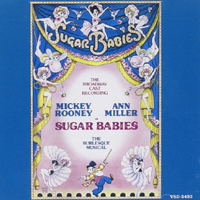 (2 / 5) Lavishly produced, beautifully designed, lovingly directed, Sugar Babies was a burlesque show featuring very funny old sketches performed by the unleashed Mickey Rooney, with Ann Miller as his partner and Jack Fletcher as his straight man. The production had a dog act, a candy butcher, a fan dancer — and you never knew what was going to come at you next. Unfortunately, this recording preserves very little of the show’s strongest suit: those hilarious low-comedy sketches, resurrected and dusted off by Ralph G. Allen. Instead, the album highlights the songs, and they’re a mostly lackluster bunch, even though nearly all of the music is by the great Jimmy McHugh. Some of the numbers have new lyrics by comedy writer Arthur Malvin; some are standards that McHugh wrote with Dorothy Fields, Ted Koehler, Harold Adamson, and others. They are well performed and orchestrated, but songs are not what we remember most about this show. — David Wolf