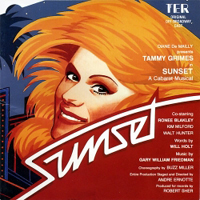 Original Off-Broadway Cast, 1990 (TER-JAY) No stars; not recommended. In 1978, a musical titled Platinum had an extremely brief run on Broadway. It starred the stylish Alexis Smith in the role of an aging movie star involved with a young rock singer. In 1983, a cut-down version of the show with four performers turned up Off-Broadway, retitled Sunset, and closed on opening night after 13 preview performances. This is the cast album of that version. With a libretto and lyrics by Will Holt and music by Gary William Friedman, Sunset concerns a straight male rock star named Danger Dan who wants to wear an old movie star’s red-beaded evening gown on his upcoming TV special. The saddest part of the whole enterprise is the waste of a talented cast: Ronnie Blakely, Kim Milford, Walt Hunter, and most significantly, Tammy Grimes in the central role. — David Wolf