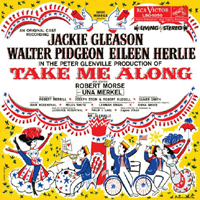 (4 / 5) Eugene O’Neill’s uncharacteristic comedy Ah, Wilderness! seemed a natural candidate for stage musical treatment — even though the MGM musical Summer Holiday, based on the same play, hadn’t been a big hit a decade earlier. Bob Merrill, who had skillfully turned O’Neill’s Anna Christie into the Gwen Verdon vehicle New Girl in Town, wrote the music and lyrics for Take Me Along, which David Merrick presented with a ticket-selling cast: Jackie Gleason (a huge TV star) as Uncle Sid; Walter Pidgeon (a Hollywood star in his Broadway musical debut) as Nat Miller; the well-known British actress Eileen Herlie as Lily; and former Hollywood soubrette Una Merkel as Essie Miller. Robert Morse, following up on his successes in The Matchmaker and Say, Darling, made a big splash in the juvenile role of Richard Miller. Take Me Along has all the elements of an old-fashioned show with a well-written score, and Lehman Engel’s musical direction is excellent throughout. Highlights include “I Would Die,” Morse’s duet with Susan Luckey as his beloved Muriel; “Staying Young,” Pidgeon’s hearty song about “today’s world” (1906); “I Get Embarrassed,” Gleason’s hilarious duet with Herlie, which is immediately followed by the latter’s loving, anticipatory “We’re Home”; and the vaudeville-inspired title song, with Gleason and Pidgeon stepping out in straw boaters and canes on their way to a Fourth of July picnic. One of the strongest numbers is the romantic ballad sung by young Richard, who can barely wait until “Nine O’Clock,” when his beloved will meet him. Listen to Morse here and you’ll get a very good idea of the innocence, charm, and heart that pervaded Broadway musicals of this era. — Jeffrey Dunn