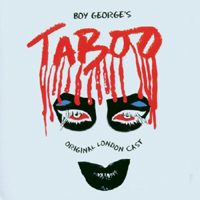 (2 / 5) Who would have imagined Boy George as a theater composer? Yet with this show, partly about George’s rise to fame in the London club scene of the early 1980s, that’s what the pop/rock star proved himself to be. As a bio-musical, what makes Taboo unusual is that its score does not consist exclusively of staples from an existing catalog. While one number from George’s Culture Club days, “Do You Really Want to Hurt Me?”, is included, the rest of the songs are original and surprisingly attractive, written by George in collaboration with John Themis, Kevan Frost, Richie Stevens, and others. “Stranger in This World” is a fine song for the young George, given an impressive vocal imitation by Euan Morton. “Guttersnipe” is performed by Morton with Mark McGee as the transvestite Marilyn, and “Love Is a Question Mark” is an insightful duet sung by Luke Evans and Dianne Pilkington. Yet the show lacks focus: It covers not only George’s ascent and subsequent fall from grace, but so many other lives and stories that we can’t latch onto anyone of them for very long. Among the people portrayed are performance artist Leigh Bowery (Matt Lewis and George himself share Bowery’s songs), nightclub promoter Philip Sallon (Paul Baker), and photographer Billy (Evans) and his troubled family (Gemma Craven and Mark White). — Matthew Murray 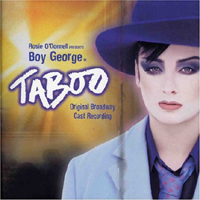 (3 / 5) Financed and promoted by an enthusiastic Rosie O’Donnell, a revised version of Taboo came to Broadway but lasted there only a few months. As heard on this recording, the musical still suffers from problems in terms of its dramaturgy, despite librettist Charles Busch’s rewrite of Mark Davies’ original book to help clarify the story line. Musical theater veterans Raúl Esparza and Liz McCartney narrate the show as a flashback, and the peripheral characters are compressed into a central group, with the songs more skillfully divided among the principals. There are two holdovers from the London cast: Euan Morton, who sounds even better here as Boy George; and George himself, who’s effective if a bit stilted as Leigh Bowery. The fine supporting cast includes Sarah Uriarte Berry, Jeffrey Carlson, and Cary Shields. Among the highlights of this recording are Esparza’s songs, the decadent opening sequence “Freak”/”Ode to Attention Seekers” and the shattering “Petrified”; McCartney’s searing “Talk Amongst Yourselves”; Berry’s reflective “Il Adore”; Shields’ tumultuous “I See Through You”; and “Love Is a Question Mark,” a dueling quartet for Morton and Shields and George and Berry. There’s also an effective new finale, “Come On in From the Outside,” and gratuitous inclusions of the Culture Club standards “Church of the Poison Mind” and “Karma Chameleon.” Intelligently produced by John McDaniel and Kevan Frost, this recording is a significant improvement over the London cast album. — M.M.