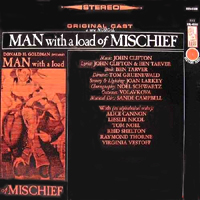 (4 / 5) For a tantalizing glimpse of the talent and creativity spawned Off-Broadway in happier times, seek out this 1966 hit, a Restoration-style comedy (though based on a minor 20th century play) that is by turns bawdy, witty, satirical, and as romantic as fine Madeira shared by the fire. It led observers to expect great things of composer-lyricist John Clifton (librettist Ben Tarver helped on the lyrics), whose melodies and harmonies are distinctive and alluring without straying too far from tradition. Sadly, one later Off-Broadway fiasco aside, Clifton’s subsequent work for the theater was minimal. That’s a pity, since vocal showpieces such as “Lover Lost,” “Goodbye, My Sweet,” and “Once You’ve Had a Little Taste” mark their composer as a natural musical storyteller with unfailing instincts as to which dramatic moments should be turned into song. On the cast album, Reid Shelton’s tenor sails easily above the staff in “Hulla-Baloo-Balay” and “Come to the Masquerade.” Virginia Vestoff acts as well as she sings in the title track and “A Wonder.” Raymond Thorne exudes patrician hauteur in “You’d Be Amazed” and “Forget!” The other three — Alice Cannon, Tom Noel, and Lesslie Nicol — are less skilled vocally, but well cast in their roles. This recording is long overdue for a digital transfer. — Marc Miller