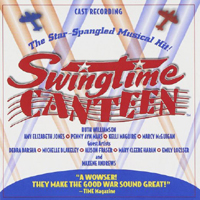 (3 / 5) When producer William Repicci caught a performance of a work in progress by Linda Thorsen Bond that was being staged in Midland, Texas, he was so impressed with the material that he recruited playwright Charles Busch to collaborate with him and Bond in refining the embryonic show. The result of their efforts is an all-female musical comedy set in London during World War II as a company of American singers, headed by an aging movie star, embarks on a U.S.O. tour of the battlefront. The Off-Broadway production of Swingtime Canteen, featuring Alison Fraser and Emily Loesser, had a nine-month run that included replacement stints by Busch — in drag, of course — playing the movie star, and a surviving Andrews sister, Maxene, playing herself. This recording features original cast members plus others — Ruth Williamson, Amy Elizabeth Jones, Penny Ayn Maas, and Kelli Maguire — from subsequent regional productions of the show. The voice of Maxene Andrews opens the recording and sets the scene. Others billed as “guest artists” include Mary Cleere Haran, who blends classic and contemporary styles in “I’m Old Fashioned” (Jerome Kern-Johnny Mercer); and Alison Fraser, who delivers “A Nightingale Sang in Berkeley Square” (Eric Maschwitz-Manning Sherwin) with exquisite simplicity. The album reaches its apex when Emily Loesser caresses “How High the Moon” (Morgan Lewis-Nancy Hamilton) with bluesy inflections. — Charles Wright