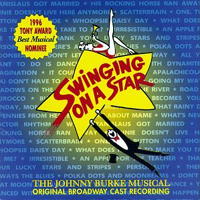 Original Broadway Cast, 1996 (After 9) No stars; not recommended. Subtitled “The Johnny Burke Musical,” this show tried to avoid being just another composer tribute revue by placing the songs of lyricist Burke within seven short vignettes of American life, ranging in time from the 1930s through the 1950s: a speakeasy sequence, a radio broadcast, a U.S.O. tour, and so on. Still, the net effect is that of an oldies songfest. Some items work better than others: Alvaleta Guess sings a sassy “Dr. Rhythm”; Lewis Cleale offers a heartfelt “Pennies From Heaven”; and Kathy Fitzgerald, Denise Faye, and Terry Burrell deliver a peppy “Personality.” But a lengthy tribute to the Hope-Crosby-Lamour “road”pictures is thoroughly lame, and overall, the recording comes across as a negligible collection of new performances of songs from vintage films. — David Barbour