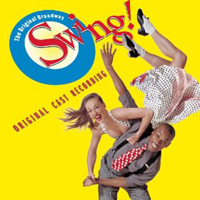 Original Broadway Cast, 1999 (Sony) No stars; not recommended. On Broadway, this revue’s main selling point was Lynne Taylor-Corbett’s ultra-strenuous choreography. What’s left on disc is a collection of mostly familiar swing tunes rendered with no particular distinction. If you feel the need to own another anthology of songs such as “It Don’t Mean a Thing (If It Ain’t Got That Swing),” “Boogie Woogie Bugle Boy,” and “Blues in the Night,” you might be interested, but be warned: Harold Wheeler’s orchestrations are surprisingly sedate. The recording does provide a showcase for top nightclub chanteuse Ann Hampton Callaway and rising Broadway ingenue Laura Benanti, but the former is heard to much better effect on her solo albums,  and except for an effective rendition of “Cry Me a River,” the latter doesn’t really stand out here. — David Barbour