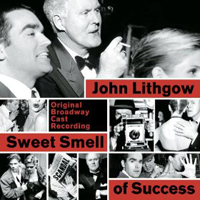 (3 / 5) With a book by John Guare, this musical based on the dark film Sweet Smell of Success found few fans during its three-month Broadway run, but the cast recording is very good and only seems to improve upon repeated listening. Composer Marvin Hamlisch and lyricist Craig Carnelia capture the essence of 1952 New York’s dark streets and smoky, neon-lit nightclubs, assisted by  William David Brohn’s orchestrations, liberally peppered with brass licks, and Jeffrey Huard’s musical direction. When Hamlisch drags Carnelia into the Broadway underworld, the results are estimable: “The Column,” “Welcome to the Night,” and “Dirt” are terrific songs. The more jazz and pop-influenced numbers — “One Track Mind,” a solo tour-de-force sung by Jack Noseworthy as the musician Dallas, and “Don’t Know Where You Leave Off,” Noseworthy’s duet with strong-voiced ingenue Kelli O’Hara as his girlfriend — are also great, although some of the score’s more character-driven songs lack the daring of the other material. John Lithgow’s Tony Award-winning performance as the powerful and ruthless gossip columnist J.J. Hunsecker is represented only occasionally in song, but his hard-edged acting in what little of Guare’s bitterly humorous book is heard here makes up for the character’s lack of musical material and Lithgow’s vocal shortcomings. As the hungry press agent Sidney Falco, Brian d’Arcy James’ enthusiasm and stamina keep him flying high throughout — particularly in his early showcase number, “At the Fountain.” At 60 minutes in length, the recording is missing a fair amount of musical material; this fractures and muddies some sequences, breaking up the show’s continuity and making it sound more conventional than it was onstage. Still, overall, the album is a fine preservation of an underrated score. — Matthew Murray