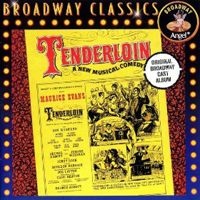 (4 / 5) It all starts with a marvelous opéra bouffe-style overture that sets the tone perfectly for this tale of the Tenderloin, New York’s most notorious neighborhood during the final decade of the 19th century. The area’s low-life denizens and a preacher determined to get rid of them are at the heart of the story, which unfolds excitingly through Jerry Bock’s music and Sheldon Harnick’s lyrics. From the rollicking “Little Old New York” and the wise “Reform,” sung by the ladies of the evening, to the luscious art song “Artificial Flowers” to the ragtime “Picture of Happiness” to some brilliantly constructed musical scenes, Tenderloin boasts one of the team’s top scores. The only problems with the original cast album are the two leading men: Maurice Evans gives a one-note performance as the preacher bent on banishing vice and corruption, and Ron Husmann as a scandal-sheet journalist has an arch singing style that displays no personality whatever. — Peter Filichia 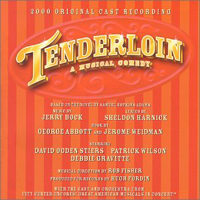 (5 / 5) This is one of the rare revival cast albums that’s better than the original. It offers crisper performances and sound, as though the singers had been recorded closer to the microphones. In the role of Tommy Howatt, Patrick Wilson has a much more freewheeling style than Ron Husmann, especially in “Picture of Happiness,” and a reprise of that terrific song adds to the fun of the recording. David Ogden Stiers comes across as a sincere preacher rather than the judgmental one portrayed by Maurice Evans of the Broadway cast. Another plus is the inclusion of introductory dialogue for many of the songs, none of which may be found on the original album. — P.F.