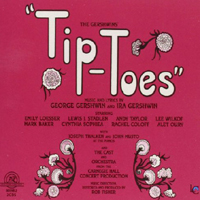 (3 / 5) This was one of the Gershwins’ middling, mid-1920s musicals, chock-a-block with mistaken identities, society marriages, and principal comics delivering numbers like “In Sardinia on the Delicatessen.” The Ira Gershwin-Buddy DeSylva lyrics are lighthearted and expert. With Tommy Krasker producing, Rob Fisher conducting, and Russell Warner orchestrating, George Gershwin’s melodies are in safe hands here, even if the orchestra of seven can’t capture the lush 1920s sound that’s called for. But the score is hardly the supreme achievement of the Gershwins in their Jazz Age phase; the outstanding numbers are “Kickin’ the Clouds Away” and the lilting “Love Is in the Air,” yet the hoped-for-hit ballad “Why Do I Love You?” sank so quickly that, two years later, Jerome Kern and Oscar Hammerstein could appropriate the title for one of their Show Boat songs with no fear of confusion. In a high-profile cast, comic-relief guy David Garrison is given more material than such roles usually command, and he’s terrific throughout. But stalwarts Christine Ebersole and Patrick Cassidy are underutilized, and the delectable Sally Mayes is out of synch with the casual vocal demeanor of flapper soubrettes. The young lovers, Diane Fratantoni and Philip Chaffin, don’t do much with the substandard Gershwin ballads, and even conductor Fisher seems to nod off a little in the ensembles. (Note: This two-CD set also includes the score of the Gershwins’ Tip-Toes, a more well known title and therefore the main focus of the recording.) — Marc Miller