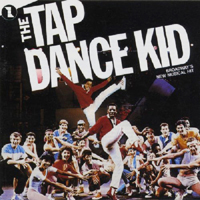 (2 / 5) Onstage, it was an entertaining, beautifully put together, old-fashioned show, but the cast album of The Tap Dance Kid reveals an uninteresting score. The musical’s strongest component is its book, written by long-time Broadway stage manager Charles Blackwell. The story centers on an upper-middle-class black family ruled by a tyrannical father (Samuel E. Wright) whose 10-year-old son, Willie (Alfonso Ribeiro), wants to be a tap dancer, following in the footsteps of his uncle (Hinton Battle). The lawyer-father’s adamant opposition to Willie’s career choice, plus other conflicts within the family involving the boy’s sympathetic mother and his outspoken older sister, drive the plot. The original cast members — those already named, plus Hattie Winston, Jackie Lowe, and Alan Weeks — give fine performances, and the songs, by composer Henry Krieger and lyricist Robert Lorick, help tell the story logically but without any particular inspiration. Here is an example of a musical whose sum is greater than its individual parts.  — David Wolf