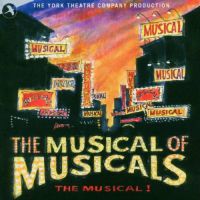 (1 / 5) This is Eric Rockwell and Joanne Bogart’s attempt to parody hit musicals by taking one melodramatic story (a landlord trying to secure rent money from his tenant) and presenting it in the “styles” of famous composers and lyricists. What might have been fun in the right hands proves to be pretty much a catastrophe, for these send-ups of Rodgers and Hammerstein, Stephen Sondheim, Jerry Herman, Andrew Lloyd Webber, and Kander and Ebb lack real wit. A few decent laughs are derived from the similarities between Webber tunes and Puccini melodies, but that’s about it; the bulk of the score is dreary, taking shots so obvious as to defy humor. For example, the R&H spoof — titled “Corn!” — includes songs titled “I Couldn’t Keer Less About You,” “Sowillyquey,” and “Clam Dip.” Other segments capitalize on tired stereotypes, with very little creative ribbing achieved. All of the performers — Rockwell, Bogart, Craig Fols, and Lovette George — are fine, but they can only do so much with the material. This recording receives one star because it’s superior to the show that spawned it; the faster pace is a plus, and the narration is less distracting than it was in the theater.  — Matthew Murray