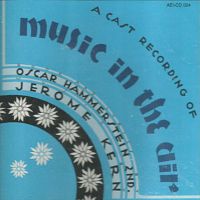 (1 / 5) If Music in the Air sounds like the title of a hokey operetta, that’s intentional; the 1932 show, with music by Jerome Kern, book and lyrics by Oscar Hammerstein, took an amused look at that genre and the egos toiling in it. The plot concerns two small-town lovers who journey to Munich with the score of her father’s show and promptly tangle with an egotistical composer-star and his muse, an over-the-top diva. The couples trade partners, but when the village girl fails to make the grade as an operetta star, the natural order of things is restored. Meanwhile, the audience is treated to such gems as “The Song Is You” and “I’ve Told Ev’ry Little Star.” This CD is drawn from the transcript of a cut-down radio version of the show, complete with a narrator and overwrought actors who speak the lines while other performers take care of the songs. Musically, it’s not a bad performance; there’s decent singing by people you’ve never heard of, plus an adequate orchestra and chorus, all in listenable sound. But the dialogue and plot have been mangled beyond recognition, and there’s no option for skipping over the “drama” tracks to hear just the songs. It’s fortunate that this document of the show exists, but Music in the Air deserves better. — Richard Barrios