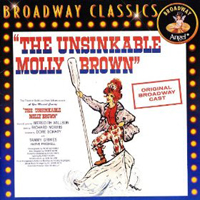 (4 / 5) “I ain’t down yet!” shouts/sings the title character of this rowdy musical based on the real-life story of Molly Brown, and that might also be the motto of the show itself. Composer-lyricist Meredith Willson wrote this score right after his spectacular success with The Music Man. In a sense, The Unsinkable Molly Brown is the feisty younger sister of that great American musical; it’s rough around the edges, but just as appealing in its own way. One reason for its initial success was the casting of the young Tammy Grimes and Harve Presnell, who were instantly recognized for their star quality in the show’s leading roles. Grimes’ inimitable voice is perfect for Molly, and her performance on the album is full of energy, especially in the rousing “I Ain’t Down Yet” and “Belly Up to the Bar, Boys.” Presnell’s gorgeous baritone is a joy; when he belts out “I’ll Never Say No,” goose bumps rise. The album is so well recorded that it makes you feel as if you’re seated front-row-center for this joyous musical.  Oddly, although Johnny Brown’s “Colorado, My Home” is in the show’s printed score and the melody is heard briefly in the overture, the song is not sung by Presnell on the album. But the recording is otherwise quite full, and since so many numbers were cut from the film version of Molly Brown and its soundtrack album (see below), this is your best opportunity to hear the bulk of the original score, including “I’ve A’ready Started In,” “My Own Brass Bed,” “Bea-u-ti-ful People of Denver,” “Are You Sure,” “If I Knew,” “Chick-a-Pen,” and “Dolce Far Niente.” — Gerard Alessandrini 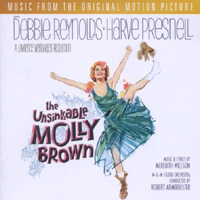 (4 / 5) Debbie Reynolds wrapped this musical around her little finger when she made the movie version. While the film is uneven, Reynolds propels it into the realm of a great MGM musical by shouting, grunting, and absolutely refusing to give less than 100 percent of herself to the role of Molly. Happily, Harve Presnell recreates his stunning Broadway performance as Johnny Brown; here, he sounds less big-baritonal and more tenorish than he does on the Broadway recording, but the effect is appropriate for the greater intimacy of the film medium. One of Presnell’s best numbers is the majestic “Colorado, My Home,” absent from the Broadway album. “I Ain’t Down Yet’ and “Belly Up to the Bar Boys” are the high points for Reynolds. Robert Armbruster’s musical direction is excellent, and the thrilling orchestrations are just about up to par with the great MGM musical sound of earlier decades. The only unfortunate aspect of the film and the soundtrack album is that so many of the Broadway songs were excised; missed most of all are “Beautiful People of Denver” and “Are You Sure?” Willson did write one new song for the film: “He’s My Friend,” a free-for-all dance number that helps keep the second half of the movie buoyant, at least until that scene where the Titanic sinks. Rhino’s expanded soundtrack CD is a delight. — G.A. 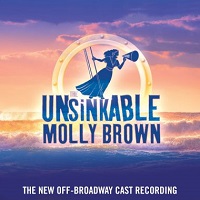 (3 / 5) A top-to-bottom revamp of this not-quite-classic musical, the Transport Group’s revisal of a show they still insisted on calling The Unsinkable Molly Brown was embraced by some but deplored by others. Courtesy of Dick Scanlan, this production featured an unfocused new book with too many added, extraneous characters, plus a different song stack  — a few Meredith Willson songs not found in the original score were thrown in, and there are also some omissions. The cast album eschews an overture and begins with “I Ain’t Down Yet,” which is probably just as well, considering the smallish orchestra heard here; and while David Aron Damane as JJ (f.k.a. Johnny Brown) brings a rich, warm baritone to “I’ll Never Say No” and other songs, we don’t get to hear him sing “Colorado My Home,” as that number is included only as a “bonus track” sung by the ensemble. (Michael Rafter is credited, or debited, with the “adaptation of Meredith Willson’s music,” and Joey Chancey is the music director.) To put it mildly, fans of The Unsinkable Molly Brown in its original form are likely to be nonplussed by all the cuts, additions, and rewrites made for this new creation. Still, the cast album is enjoyable on its own terms, highlighted by Beth Malone’s delightfully spunky performance in the title role, plus some lusty singing from the rest of the company. And for all of the objections that might be filed concerning the major changes made for this revisal, it is nice to have “He’s My Friend,” which Willson wrote specifically for the film version of Molly Brown, finally included in the show score.  [Note: This production’s run was abbreviated by the COVID pandemic, and the cast recording sessions were delayed, which accounts for the fact that the album wasn’t released until the summer of 2022.] — Michael Portantiere