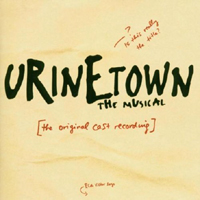 (4 / 5) This show, which winks at Bertolt Brecht-Kurt Weill works and like-minded tuners, poses the musical question: Is it possible for a score to be too clever? The answer is probably yes. To complement a book about a Mahagonny-type burg where the citizens are oppressed by a corporation that controls all restrooms, composer-lyricist Mark Hollmann and lyricist-librettist Greg Kotis wrote a tuneful score that cannily mocks even as it pays homage. While hooting at musical cliches in song and dialogue, the creators walk a thin line with the agility of world-class aerialists. Spilling from this words-and-notes cornucopia are send-ups of such musical conventions as title tunes, double-edged ballads (“Follow Your Heart”), comedy turns (“Don’t Be the Bunny”), and heart-lifters (“Run, Freedom, Run!”). The cast is led by staunch Hunter Foster, full-of-his-bad-self John Cullum, cute-as-a-frayed-button Spencer Kayden, sincere Jennifer Laura Thompson, and Jeff McCarthy, who places his tongue very firmly in his cheek in the role of Officer Lockstock. All have the required fervor. The problem is an embarrassment of riches that begins to tire the listener as the songs, delivered by a dynamic ensemble, start to sound alike. Of course, those who experience Urinetown only via the recording can’t see the wonders worked by John Rando and John Carrafa, who followed the tunesmiths’ ribbing of various styles of musical theater writing by doing the same with their direction and choreography, respectively. Still, the score is far above average for contemporary musicals and very well played by a sassy five-person band, with Edward Goldschneider at the piano. — David Finkle