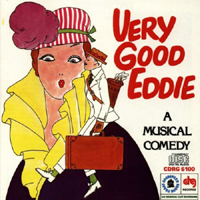 (3 / 5) Very lively, very catchy, very melodic — but not Very Good Eddie. The Goodspeed Opera House’s revival of the 1915 Jerome Kern musical — the first show in the famed Princess Theatre series — was such a hit in Connecticut that David Merrick picked it up and brought it intact to Broadway, where it ran for nearly a year. But, as is Goodspeed’s bad habit, the production fiddled with perfectly fine original material. The result was a kind of hybrid, with several songs missing and others appropriated from various other Kern shows, so much so that nine lyricists are credited! Russell Warner’s lean orchestrations are probably reasonable reductions of Frank Saddler’s originals but, as musical director/conductor, Warner sticks pretty much to one speed: “rollicking.” Yes, the score is full of infectious ragtime, but even ragtime should have more variety than this. Worse, the performance style evinces much winking and borderline camping, especially among the women: Virginia Seidel’s Minnie-Mouse-on-speed chirping just about kills the irresistible “Left All Alone Again Blues,” and Travis Hudson stomps “Moon of Love” into the floorboards. But male leads Charles Repole and David Christmas are more appealing, and the chorus numbers, such as “I’ve Got to Dance” and “Hot Dog,” are so ingratiating that you will, in fact, want to get up and dance. — Marc Miller