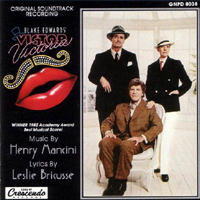 (1 / 5) The Blake Edwards film that served as the basis for Julie Andrews’ last Broadway musical is really a comedy with a few incidental songs. Based on a 1933 German film, it stars Andrews as Victoria, a light opera soprano stranded in  1930s Paris. She’s taken in by Toddy (Robert Preston), a gay nightclub performer who reinvents her as Victor, a Polish female impersonator. Trouble sets in when King Marchan, a Chicago gangster (James Garner), finds himself attracted to “Victor.” The wildly padded soundtrack disc is filled with instrumental interludes from Henry Mancini’s easy-listening score. The film’s few actual songs, with lyrics by Leslie Bricusse, are heard repeatedly in different versions; for example, the silly specialty item “The Shady Dame From Seville.” Andrews and Preston are never less than pros, but this recording is barely worthwhile. — David Barbour 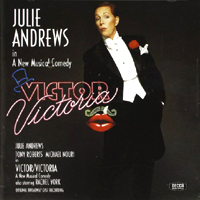 (1 / 5) Julie Andrews’ much-anticipated return to Broadway was upstaged to a certain extent by this show’s many peripheral dramas, including Andrews’ frequent absences, her Tony Awards boycott, and the notorious replacement runs of Liza Minnelli and Raquel Welch. Victor/Victoria was a long-run disappointment, a ham-fisted adaptation of a hit Andrews film put together by a mediocre creative team led by Andrews’ husband, director-librettist Blake Edwards. As in the film, which was also written and directed by Edwards, Andrews’ Victoria is transformed into Victor by Toddy, played here by Tony Roberts (see the review above for more of the plot). Even with her voice darkened by age and afflicted with mannerisms, Andrews is fun to hear on the album; but to get to the pleasant bits, you’ll have to put up with some of the weakest songs ever written for a Broadway show. The main culprits are Henry Mancini and Leslie Bricusse, but additional music was written by Frank Wildhorn after Mancini’s death. “If I Were a Man” sets up the plot in the most laborious fashion. Even worse is “King’s Lament,” in which Victoria’s love interest, King Marchan (Michael Nouri), wrestles with his masculinity. The rock-bottom songs go to Rachel York in the role of King’s chorine girlfriend; they include “Chicago, Illinois” from the movie version (“Smack on the lake, this is a rare port / Someday, they say, we’ll have an airport!”) and the egregious “Paris Makes Me Horny,” which rummages through the names of European cities for the sake of smutty jokes. (Sample: “Been to Munich, where every guy’s a eunuch.”) Andrews makes something out of generic ballads like “Crazy World” (again, from the film) and “Living in the Shadows,” and she has fun with “Le Jazz Hot” (also from the film), but she and Nouri are defeated by the deadly “Almost a Love Song,” which has almost a melody. An unintentional camp highlight is “Louis Says,” one of Victor’s onstage numbers, in which Andrews swans about the stage as Marie Antoinette. Just try to parse the impenetrable stream-of-consciousness lyrics of this song. — D.B.