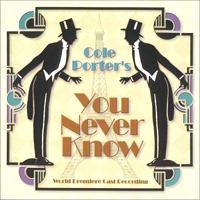 (3 / 5) This 1938 flop is a musical adaptation, with songs by Cole Porter and a book by Rowland Leigh, of Siegfried Geyer’s By Candlelight, which was itself an adaptation of a Viennese operetta. In the 1980s, musical maven Paul Lazarus put together a new version of the tuner from bits of the original, interpolated some songs from other Porter works, and then tried out the result at a couple of regional theaters. This recording is based on the 1991 Pasadena Playhouse production, and is labeled as the “world premiere recording” of the piece. (A cast album of a 1973 Off-Broadway revival of the original version apparently exists, but it’s an extremely rare item.) The big numbers retained from the original score are “From Alpha to Omega” and “At Long Last Love” — but, for some inexplicable reason, Lazarus doesn’t include all the lyrics to either of those songs. What is here is extremely well sung by Kristin Chenoweth, Harry Groener, Donna McKechnie, David Garrison, Angela Teek, and record producer Bruce Kimmel in his Guy Haines incarnation. — David Finkle