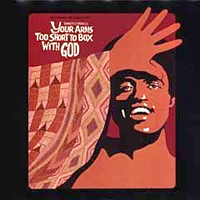 (2 / 5) Just as The Wiz was an all-black version of The Wizard of Oz, this show might be considered an all-black version of Jesus Christ Superstar. That’s true in the sense that both shows deal with the last seven days in the life of Jesus, from Palm Sunday through Good Friday to Easter Sunday, but the profound difference between them can be gleaned from a glance at the tune stack. While the entire score of Superstar is by Andrew Lloyd Webber and Tim Rice, the song list for Your Arms Too Short to Box With God is littered with asterisks, plus signs, and minus signs before the various titles to indicate different authorship. Eight of the songs were written by Micki Grant, nine by Alex Bradford, and one by H.B. Barnum. They’re all gospel tunes that attempt to be stirring, but none of them has any real power, passion, or distinction. To paraphrase a much better show on the same subject: You won’t know how to love them. — Peter Filichia