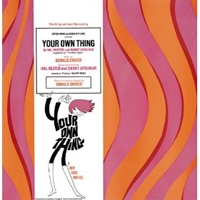 (2 / 5) “‘Tis wonder that enwraps me thus, yet ’tis not madness. What a groovy lady!” And there you have the central joke of this hit Off-Broadway musical, loosely adapted by librettist Donald Driver and songwriters Hal Hester and Danny Apolinar from Shakespeare’s Twelfth Night. Set in a swinging Illyria that looks and sounds like the East Village, where the musical played for over two years, Your Own Thing has a mild subversiveness and an abundance of electric guitars and drums (Hayward Morris’s orchestrations were beefed up for the album by Peter Matz), along with a cheerful, your-own-bag-is-where-it’s-at philosophy. Some of the songs are undiluted Shakespeare, others are closer to Hullabaloo, yet you’ll be surprised at how well “Come Away, Death” and “Hunca Munca” complement each other.  Unfortunately, the performance perpetuates the bogus philosophy of so many rock musicals: pretty voices are, like, uncool, man. Leland Palmer’s breathy Viola makes some unpleasant noises, even in the ballads, while Tom Ligon’s Orson (read: Orsino) and Marcia Rodd’s Olivia are just adequate from a vocal standpoint. (Rodd replaced Marian Mercer in the show before the recording date.) Just about the only real musical-theater type on hand is Rusty (later Russ) Thacker as Sebastian; it’s a good thing that he gets some of the better material, such as “I’m on My Way to the Top” and a sweetly ironic reprise of “The Middle Years.” Much of what made Your Own Thing such a groovy evening was visual: the Beatles haircuts, the Carnaby Street threads, rear-projection gags that poked fun at everyone from John Lindsay to John Wayne, and so on. Still, the score is energetic, ingratiating, and sometimes ingenious. If only it were better sung! — Marc Miller