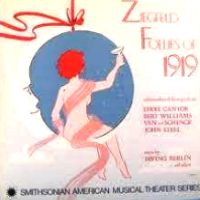 (3 / 5) By the time of its 13th edition, Ziegfeld’s legendary beauty-and-music revue was a Broadway institution. Some historians hold that this 1919 version was the greatest of all Follies, although others feel that the 1936 version, headlined by Bob Hope and Josephine Baker, brought the revue to a brilliant, posthumous apex four years after Ziegfeld’s death. Fortunately, a large number of recordings exist to back up claims for the Ziegfield Follies of 1919. This was probably the most star-laden of all the editions: Eddie Cantor, Bert Williams, Marilyn Miller, Van and Schenck, Eddie Dowling, and, in a cornerstone of Broadway mythology, tenor John Steel introducing Irving Berlin’s “A Pretty Girl Is Like a Melody.” Not all of the cast members made recordings of their contributions, but enough remained for The Smithsonian Collection to issue a fine compilation. Here is the tragically short-lived Williams in “Somebody” and “Everybody Wants a Key to My Cellar,” Cantor having a ball with Berlin’s “You’d Be Surprised,” and Van and Schenck’s distinctive, close harmony in “”Mandy.” The sound quality of these acoustical recordings is variable and distinctly Io-fi, but here is history come to life. (One succulent item was dropped from the show during tryouts and not recorded: “Perfume of Opium.”) The album’s annotations are excellent. — Richard Barrios