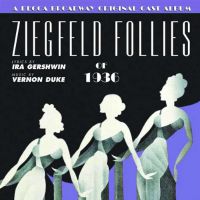 (5 / 5) You can always tell an overture arranged and orchestrated by Hans Spialek: The brass section announces something important, the woodwinds flutter and swoop upward in anticipation, and the tension builds to a point where the only thing that can break it is a great song. Spialek’s overture to Vernon Duke’s score for Ziegfeld Follies of 1936 takes in one standard (“I Can’t Get Started”) and several interesting not-quite-standards (“My Red-Letter Day,” “Words Without Music,” “Island in the West Indies”). As conducted superbly by Rob Fisher, it’s the entry point to one of the most fully realized excursions into the past ever attempted by City Center Encores! With the series’ repertoire having grown safer over the years, this title was a real anomaly: an ancient, not particularly well-regarded topical revue with forgotten Ira Gershwin lyrics and an all-star cast that could never be replicated. Well, are you in for a surprise. Nearly every number is a gem, and nearly every member of the Encores! cast is up to the material. “Words Without Music” has one of the strangest, most sophisticated melodies written for Broadway in the 1930s, and Ruthie Henshall matches Gertrude Niesen, who introduced it, for individuality; throaty and idiosyncratic, Henshall is like Tammy Grimes with more musicality. Christine Ebersole, handling Eve Arden’s songs, is insinuating in “Island in the West Indies” (which serves up another fabulous Spialek arrangement) and hilarious in “The Economic Situation,” a fascinating Gershwin curiosity. Later, Ebersole shares “I Can’t Get Started” with Peter Scolari, who perfectly emulates Bob Hope’s comic-leading-man timing and light-but-secure voice. So luxurious is the casting that such Broadway stalwarts as Howard McGillin, Jim and Bob Walton, and Karen Ziemba are nearly crowded out, though all are exemplary in what they’re given to do. Stephanie Pope lacks heat here, and Mary Testa is a slightly bland Fanny Brice — but when a time capsule is this beautifully engineered, the best thing to do is stifle all quibbles, climb aboard, and enjoy the ride. Great cover art, too. — Marc Miller