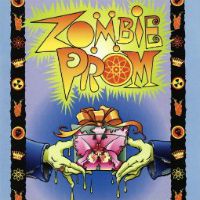 (4 / 5) The talented team of librettist-lyricist John Dempsey and composer Dana P. Rowe mined the familiar terrain of Little Shop/Rocky Horror teen-nostalgia-science-fiction-horror, then threw in a little Bye Bye Birdie and Grease, and came up with this short-running, Off-Broadway lark. As the title suggests, it’s about an undead senior in Eisenhower’s America who comes back to attend his high school prom and reclaim the love of Toffee, his sweetheart. Sure, Zombie Prom is a goof — but it’s a well-structured, modestly scaled goof with smart pastiche melodies and fun, intelligent lyrics that really rhyme. Listen to how smoothly the songs segue into dialogue and into other songs on this spiffily produced recording, which features an appreciative essay by musical theater historian Martin Gottfried. And the cast is among the best of the 1990s: Jessica-Snow Wilson is quite an adorable Toffee (“Where once that girl was effervescent / She’s now a poster-child depressant / A problematic post-pubescent”), while Richard Roland is a sweet, supple-voiced zombie. As a scandal-sheet editor who gets mixed up with the denizens of Enrico Fermi High, Richard Muenz for once finds a role wherein his natural hamminess is an asset. And as Delilah Strict, the school’s horrifying principal, Karen Murphy is a powerful-voiced camp diva with just the right sense of mockery. In the theater, her “Rules, Regulations, and Respect” stopped the show; we’re lucky to have it preserved here. — Marc Miller